Camurphy (Cam/Murphy) is the conflict between Degrassi Fan and Blazen96. They are known for having a long standing rivalry throughout their time on the wiki together.

Cam and Murphy met in early fall of 2011, when Murphy started actively using the wiki. However, they didn't start interacting until November of the same year. Originally, Cam and Murphy got along just fine. Despite never being close friends, they were always respectful to each other, and on occasion, even invited the other person to Tinychats with other wikians.

Their rivalry started off small and escalated as time went on. In January 2012, Murphy began harbouring resentment towards Cam when he found out that Cam was using Tinychat with wikians and not inviting him anymore. He began throwing shade at Cam anytime he entered the chat room, to which Cam usually ignored, as he knew that Murphy would ultimately be the one who looked immature to the other wikians. Their conflict worsened when Murphy made inappropriate jokes about Pearl one night in February 2012. Cam and Kat defended Pearl, which caused Murphy to snap at both of them. This ultimately caused issues for him and his friendships with Kat and Pearl, while simultaneously worsening his rivalry with Cam.

On March 4, 2012, Sannse blocked Murphy from the Wiki for globally vandalizing other wikia communities. Murphy requested Cam to unban him. Cam agreed to do so and tried, but Sannse had him globally banned across all wikis, and therefore, Cam could not help matters. At that point, Murphy decided to depart from the wiki, as he also had no choice. Kat and Cam decided that it was the best seclusion as Murphy had caused a lot of drama up at that point. Murphy's ban expired on July 4, 2012. He made a brief return on the wiki comments for one day, then did not return again until the end of the summer.

On August 21, 2012, Murphy made another return and claimed to be in a better place and happy to start using the wiki again. He openly spoke on chat saying that he wanted to move on from any drama from the past. Kat and Pearl didn't interact with Murphy much upon his return, although, Murphy didn't seem interested in talking to them. However, he did gravitate towards talking to Cam again. While sceptical about talking to Murphy again, Cam remained civil towards him for the time being.

However, this took a turn in early October 2012. Murphy PMed Cam one night and confessed at how he oversaw a conversation Cam having with Michi on their talk pages during mid-July 2012. In their convo, Cam and Michi both admitted that they did not Murphy's presence on the wiki. Murphy said that he felt Cam was really fake. Cam tried to lean their issue up by admitting he didn't miss Murphy at the time, but wouldn't have said that anymore. However, their argument didn't end on a very positive note.

Once the Friendship Club Wiki opened in October 2012, Murphy began getting much closer to Jake, Hunter, Sami and several other users. In the process, he began flaunting his friendship with all of them, much to Cam's irritation. Cam began expressing his annoyance indirectly while they spoke in chat, which continued for several weeks. Cam and Murphy stayed away from each other during the last couple of months in 2012, as both of them were hanging out with different people.

By early 2013, Cam and Murphy knew better than to speak to one another. They often avoided interaction. However, due to the fact that they both used the Friendship Club wiki, they ran into each other quite often, and did not get along. Cam used Tinychat with CJ, Jake, Kelly, and Michi, to which Murphy was never invited to, as Cam knew it would only cause issues for them. Murphy found out that this was occurring and became furious with Cam and the others.

Murphy constantly made posts about leaving the wiki and about people on the site being fake. Cam's resentment for him only worsened as the year went on. Murphy took a hiatus in April 2013, after frustration with wiki drama, and decided that he was leaving the site for good in May 2013. He returned in July 2013 and admitted that he wanted nothing to do with drama and fake people. He claimed that was only on to comment about the show again.

In August 2013, Murphy made a "What Do You Think of Me" blog, to which Cam wrote a long post on, outlining that he did care about Murphy, but admitted that he found him immature, overdramatic, and obnoxious. Murphy then replied with an even longer post saying that he was grateful for Cam being truthful and for him as a person, in general. After seemingly dissolving most of their conflict, Murphy continued making dramatic goodbye and "who my real friends are" posts during September 2013 and Cam, once again, became annoyed.

In October 2013, Murphy asked Derek to be his date for Delia's wiki homecoming event. Murphy had made yet another goodbye post on the night of the homecoming, and Cam assumed that Derek was now dateless. He invited Derek to join him on chat, to which Derek accepted and joined him. Once Derek had taken off to bed, Murphy piped in and said that he was still planning on joining Derek for homecoming, in a very defensive manner. Cam and Murphy's escalated and turned into a full on huge fight on Derek's talk page, with several wikians watching, as wiki prom was still happening. Their fight ultimately ended with Murphy leaving the wiki again, but the argument remains notorious to this day. 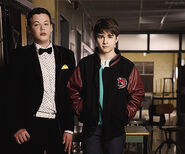