Cam jokingly asked Damian to be his boyfriend on Damian's first night on the wiki. Much to Cam's surprise, Damian agreed instantly and they have since been close friends. 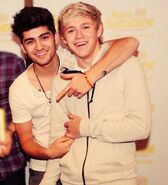 Retrieved from "https://degrassi-wiki-ships.fandom.com/wiki/Degrassi_Fan-BreatheMe_Relationship?oldid=19522"
Community content is available under CC-BY-SA unless otherwise noted.