Caris (Cam/Maris) is the friendship between Degrassi Fan and Destiels.

Cam met Maria in 2011, when she went by the username Painting Flowers. They became very close friends and stayed close through all of 2012 and most of 2013. They began talking less after 2013 ended and have not spoken very much since, except on their birthdays and holidays. 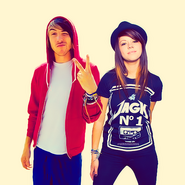 Add a photo to this gallery
Retrieved from "https://degrassi-wiki-ships.fandom.com/wiki/Degrassi_Fan-Destiels_Friendship?oldid=21325"
Community content is available under CC-BY-SA unless otherwise noted.