Cam and Aleesha met in 2011. Aleesha has not been regularly active on the wiki since December 2012, but she and Cam stayed in touch for most of 2013, but have began talking much less of recently. 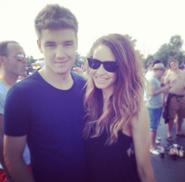 Add a photo to this gallery
Retrieved from "https://degrassi-wiki-ships.fandom.com/wiki/Degrassi_Fan-Dreli_Friendship?oldid=19570"
Community content is available under CC-BY-SA unless otherwise noted.