Their interaction began when Tori noticed that Jessy had an icon of Savannah Berry from season 4 of The Voice and started to talk to her about the show. Since then, the ship has progressed into a conflict through Board Game Online, most notably with Russian Roulette and Tori stealing Jessy's items with telekinesis.

They constantly bicker about who is the "supreme" at Board Game Online. 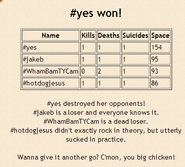 Add a photo to this gallery
Retrieved from "https://degrassi-wiki-ships.fandom.com/wiki/FanCy-JessyPop_Conflict?oldid=15096"
Community content is available under CC-BY-SA unless otherwise noted.