Cam and Tay were both on the wiki during 2011, but didn't officially start speaking until 2012. Tay is no longer active on the wiki, nor do her and Cam still talk very often, but they still have each others' social media as contact. 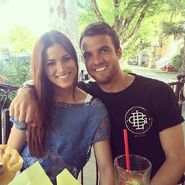 Add a photo to this gallery
Retrieved from "https://degrassi-wiki-ships.fandom.com/wiki/HeyitsTayy-Degrassi_Fan_Friendship?oldid=19672"
Community content is available under CC-BY-SA unless otherwise noted.