The friendship between Crazychick08, Gaskarths, and Karen valentine.

"Up and running! Now we just need to Take A Hint and Give It Up so we can Make It Shine and excuse me I need to hit myself that was so pathetic" - CC to Ash on the page's creation 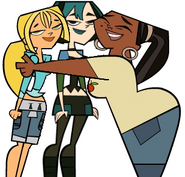 Retrieved from "https://degrassi-wiki-ships.fandom.com/wiki/Hollywood_Arts?oldid=21463"
Community content is available under CC-BY-SA unless otherwise noted.